The flaws in this chess-based Netflix miniseries cause it to fall just short of perfection. 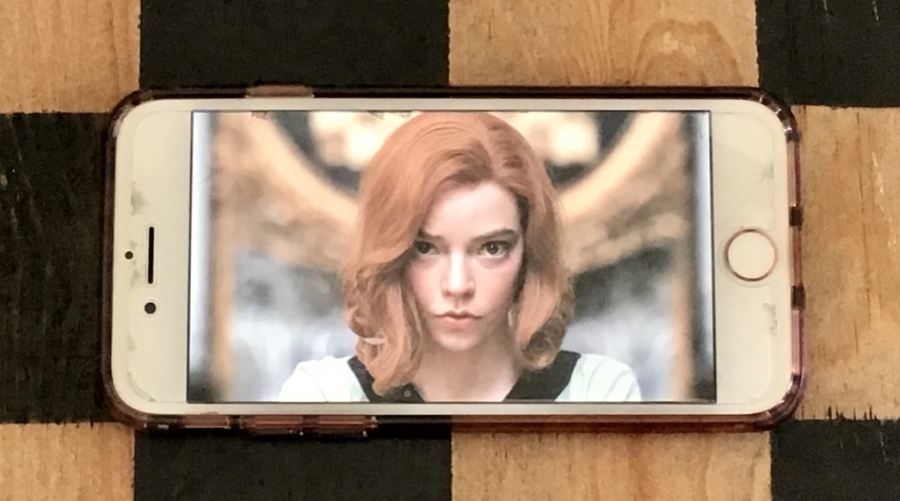 Beth Harmon looks across the board during one of her matches in Paris. (Photo by Dillon Rankin.)

Disclaimer: This article contains minor spoilers for The Queen’s Gambit. Read at your own risk.
The Queen’s Gambit, Netflix’s mini-series based on the 1983 novel of the same name, opens with the aftermath of a car accident, orphaning our protagonist, eight-year-old Elizabeth Harmon—played by Anya Taylor-Joy—, who is subsequently sent to an orphanage. While there, Mr. Shiebal, a janitor—played by Bill Champ—, awakens her love of the game of chess, at which she is a once-in-a-generation prodigy. From there, the seven-episode series follows Beth’s trials and tribulations in the world of competitive chess throughout the 1950s and 1960s at a delightfully fast pace, wasting no time with filler storylines or fluff of any kind.

Throughout the series, Beth plays in tournaments all over the world, from Cincinnati to Moscow. This gives the series the opportunity to show off the things it does best: camerawork and set design. The producers—William Horberg, Allen Scott, and Scott Frank—manage to create a separate atmosphere for each setting, syncing these atmospheres with the plot of the overall show. This is driven home with the creative use of narration during some of the show’s most contentious matches, particularly those against Vasily Borgov—played by Marcin Dorociński—, a Russian Grandmaster and current World Chess Champion, and acts as the series’ main antagonist.

While The Queen’s Gambit has everything to do with chess, the game itself isn’t at the heart of what the show is all about. Remarkably, the show is still perfectly entertaining to those who haven’t the faintest idea how to play the game and has inspired a new generation of individuals to learn how. It, like any good show, has a premise but is ultimately about connections between the characters.

The show is also beautifully scored, with original music composed by Carlos Rafael Rivera perfectly accenting some of the show’s more emotional moments. Accompanying this original score is an equally well-chosen soundtrack, featuring such retro hits as The Vogues’ “You’re the One”, Peggy Lee’s “Fever”, and “Classical Gas” by Mason Williams.

Even with all of the other things, The Queen’s Gambit does well, perhaps the best part of it was its empowering message for viewers. Chess, especially in the 1960s, was (and somewhat still is) an incredibly sexist sport. Though there have certainly been female prodigies and many astounding female players, they have all felt the brunt of the misogyny that runs deep within the chess community. For a show to portray a show about a chess genius with a female lead is a great step in the right direction for the future of the sport.

Additionally, the show includes deep LGBTQ+ themes without ever explicitly mentioning the topic of sexual orientation. While in Paris, Beth has a brief romantic entanglement with a woman named Cleo—played by Mille Brandy—, and it is heavily implied that one of Beth’s closest friends in the chess community, Townes —played by Jacob Fortune-Lloyd—, is gay, which results in an emotionally wrenching scene in the finale. This sort of representation feels very natural, even in the time period, and doesn’t come off as forced, which is a refreshing addition when it comes to series produced by Netflix.

For all its brilliance, The Queen’s Gambit is not without its flaws, one prime example of which is its mischaracterization of drug use. Throughout the show, Beth struggles with addiction to various substances, including cigarettes and alcohol, as Beth believes she plays better chess while intoxicated. The problem, however, is that Beth suffers little to no consequence as a result of her addiction; after a particularly humiliating defeat in Paris, Beth returns back to her home and attempts to drown her sorrows in substance abuse, and yet miraculously pulls herself together just in time for the series finale. There are no hints of withdrawal symptoms, relapses, or any other things drug addicts in the real world face when they try to quit. In the end, it feels as though drugs were added to the show as its deus ex machina, when in fact, the exact opposite is true in the real world.

Another such issue with the show was its finale, detailing Beth’s experiences during an invitational tournament in Moscow. It plays out in a quite predictable way, with Beth effortlessly crushing all of her competition. Though the finale is not without emotional impact, the result feels like a foregone conclusion after Beth triumphs over another Grandmaster only referred to as Luchenko (played by Marcus Loges), her only significant competition besides Borgov. The finale does bring emotional satisfaction and closure to the viewer, but one cannot help but feel as though there was something missing from it.

Nevertheless, The Queen’s Gambit is one of, if not the best series that Netflix has ever made. Its fast pace, beautiful cinematography, masterful score, stellar acting, and empowering premise all add up to a deeply satisfying show; one that is absolutely worth watching.