The Impact of Online Learning on Colorado Students 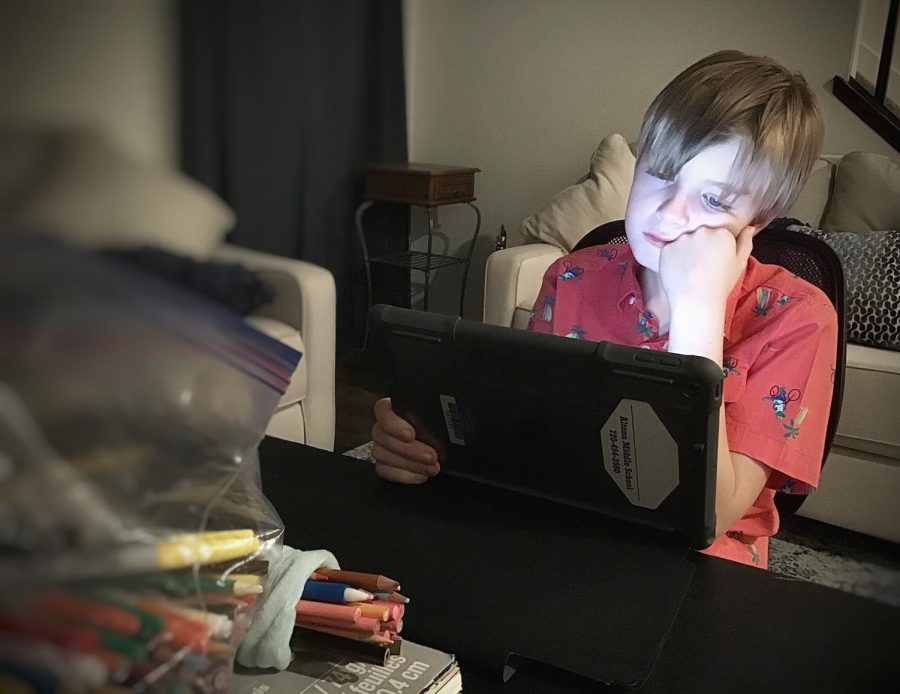 Focusing on his schoolwork, Dominick Jellico, a 6th grader attending Altona Middle School, sits at home finishing up schoolwork in an all virtual environment, hoping to complete his tasks for the day. He completed his assignments with ease, despite the virtual environment the COVID-19 pandemic has caused, and he was able to remain focused to complete his work. “The schoolwork was pretty easy, especially since virtual learning provides a quiet environment I can really focus in,” says Dominick.

In March of 2020, schools became virtual because of the COVID-19 pandemic, leaving the academic community to debate over the physical impact of a virtual learning environment on students and families. The many opinions and perspectives coming from individuals have created quite an unrest in the academic community. Many students have been said to have been placed in high mental strain because of the change in learning styles, but many students have stated that virtual learning may only have a slight negative impact or no impact at all.

Students such as 17-year-old Broderick Jellico, attending Silver Creek High School, proves that not all students view the lack of physical school entirely as a setback. He is one of many students who haven’t been very affected by the change.

“School is just another day of life,” says Broderick. “I’d like to get out of school as fast as possible. I just want to get things done. [Virtual learning] hasn’t changed a thing.” His statement represents a fairly small percentage of the academic community, but their perspectives mean more than just small when determining upcoming decisions on how to proceed with education in this time of crisis.

Ken Jellico is the father of three, including Broderick, his eldest child. He presents his thoughts about the virtual learning environment his children had to swiftly adapt to in late March. “I think there are some disadvantages to it, but I think my kids have accepted it for what it is and they are doing the best they can with what they have available,” says Jellico. “But I also wonder if it leaves an opportunity for shortcuts.”

He specifically says, “[Broderick] is focused, but he gets impatient, and I think he wants to get through it as fast, quick, easy, and clean as possible…which I think gives certain opportunities to do that in an online, virtual environment.” Jellico’s commentary contributes to the idea that the virtual learning environment limits students such as Broderick from receiving a full, in-depth learning experience, leaving the opportunity for students to become lazy and slowly lose the motivation for learning that they may have once had in previous years of school.

Tracy Bartlett, parent, and teacher in the Adams12 school district, has viewed virtual learning similarly, in the way that students have become lazy and have lost much of their motivation for learning. She explains, “I have noticed some students taking short-cuts, but the majority just don’t do the work.” She further explains, “I have assigned students to go to Typing Club and practice typing for the last 20 minutes of our 45-minute class, and I’ve noticed about 10% of the students are actually doing it…I want to cut them some slack, knowing they are under a lot of pressure and stress too.”

Bartlett is not the only teacher who has noticed students taking short-cuts, neither is she the only one trying to “cut them some slack.” Numerous teachers, including Bartlett, have made observations that leave them to conclude that students have truly lost, or are progressively losing motivation for learning in an online curriculum.

Another student, Dominick Jellico, who is currently attending Altona Middle School states his reasoning to continue learning entirely online to be quite similar to his brother’s. He says, “I am lazy, and not very motivated.” He too does not view the lack of a physical learning environment as much of a restriction to his learning.

According to many students of various ages, social aspects are the part of physical school that students look forward to the most. Students such as Dominick who prefer to work independently have said to not be as affected by the transition of learning styles as those who prefer to learn cooperatively in groups.

Opposing Broderick’s and Dominick’s perspectives, 15-year-old Mary Wilson, a student attending Silver Creek High School, believes that the positives of a physical learning environment entirely outweigh the negatives. She is also one of many who deeply value the ability to socially interact with her friends, teachers, and classmates.

“I definitely like the freedom I have in virtual learning,” Wilson explains. “I’m not stuck in a chair six hours a day, but that’s about where it ends. I don’t have that teacher to student contact I would normally have, which is helpful for when I have a question, and ultimately improves my learning. I can’t see my friends during virtual learning either… virtual school makes me feel trapped.”

Wilson is not alone. The majority, roughly four out of six students, prefer to be in physical school rather than in an online learning environment. Many of these students miss spending time with their friends the most.

Jellico says, “I think the pandemic affects everyone in different ways, and we deal with it in different ways. He further explains, “We are not all the same. Some people, I will give you an example, they really want to get back to work. They want to get back into the office. That could be for a number of reasons…The pandemic affects that a lot, differently than somebody like me, that can really work just as effectively [at home], and doesn’t really need to be in the office.”