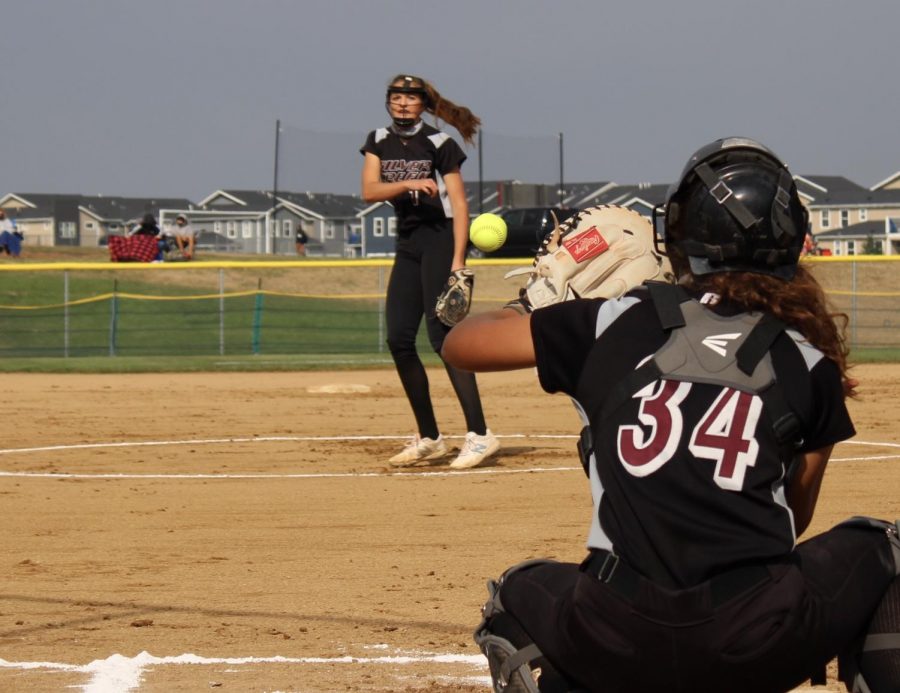 Photo Illustration by Madelyn Bowling-Garcia Maddie Kuehl, Silver Creek’s Varsity Softball pitcher warming up with Varsity catcher, Ashley Gaccetta. Taking the field, Silver Creek’s Varsity Softball team warmed up for their game against the in-town competitors, Skyline High School. In the circle, Maddie Kuehl (12) pitched to Ashley Gaccetta (11). To start off the game, Silver Creek showed out on their home turf, with three consecutive strikeouts. Not pictured, the infielders gathered around their pitcher after each successful strikeout. “When my infielders gather around me after a strikeout, it gets me hyped to get the next out for my team” said Maddie Kuehl.

It’s the fall of the school year of 2020-2021, and the Silver Creek softball team was having a game against the in-town competitors: Skyline. Walking through the entrance toward the ballpark, there are standing posts everywhere stating “Mask required”, “Stay 6ft apart at all times”. Then a school associate is asking for a ticket. Walking down toward the field, all the players, coaches, umpires are wearing masks. It’s hard to tell what’s going on, but the energy from the players is still electric despite the situation. These new precautions are what made Colorado High School Activities Association (CHSAA) decide to allow high school softball teams to be played during this atypical and unprecedented season.

On July 29th 2020, softball athletes across the state of Colorado were given the news that the 2020-2021 high school softball season was permitted for their season. To ensure safety for everyone on the field, CHSAA put in place procedures that participating schools must follow. Players, coaches, and umpires must always have possession of a mask on the field. A few athletes didn’t have to wear a mask while playing such as the outfielders. They could pull down their mask due to the tremendous amount of space between them and everyone else. On the other hand, athletes in closer proximity such as the infield, and those who aren’t participating have to wear a mask. Students within dugouts are advised to distance at least 6 feet from each other while wearing a mask. No traditional celebratory acts can happen this year such as greeting the player at the home plate after she hit a homerun, high fiving, or any other kind of physical and unneeded exposure.

Here at Silver Creek High School, our Lady Raptors have been very understanding of the new rules. Along with the previously stated guidelines, there were a handful of more added to the softball bulletin in order for all schools to participate. Temperatures of players must be logged before every practice and game. Athletes distance between each other at all possible times. The amount of people allowed on school grounds was limited; only two guests per athlete. Limiting to 12 players to suit up for a game. And a flyer needed to be signed by athletes agreeing to play during this season, if athletes came into contact with COVID, it wouldn’t fall on the school’s behalf.

The Lady Raptors were given so many obstacles from the beginning of this season. To add to the COVID obstacles, Silver Creek was also placed in a new conference this year. Last season, Silver Creek fell under the 4A Northern Conference. Due to the Northern conference ending, they entered the 4A NCAC conference this season. Facing tougher competition such as Windsor, Mead, and state champions last season: Erie. The two biggest impacts reflected in the program was the roster limit and team bonding. The roster was limited to 12 people for a game. The seniors who could possibly play during a normal season have been bucked to the benches by the younger talent on the field. Team bonding between all players, such as team dinners or building the Homecoming float were canceled. There were no connections between the player’s Varsity and Junior Varsity. The teams had to overcome tremendous adversity to push for a better season.

With a rough start to the season, Silver Creek softball games weren’t as lively on the field when compared to last season. When asking a fellow Silver Creek softball player, Hannah Farr, a senior here at Silver Creek, why she thinks the team wasn’t doing so well in the beginning. She replied “After a team discussion we all came to the conclusion that we were playing for individual goals, not team goals,” said Hannah Farr “ We agreed to start ‘playing for the we not the me’”. COVID-19 has definitely impacted players and teams’ competitive drive this year. With all the isolation on the field, players are starting to drift from one another. Once making this team sport now for one’s personal benefit. It’s not the player’s fault. They’re forced to be separated from teammates and traditional team bonding cancellations.

While asking one of the assistant coaches for Silver Creek’s softball team, Coach Lathrop, what he thinks was blocking the teams’ effort and competitive drive. If he believed that environmental or other aspects with blocking the Silver Creek playing at their top performance Coach Lathrop replied “I do think that the environment this year is having an effect on all our teams,” Jason Lathrop said, “they’re not seeing their friends in the hallways, talking about the game this afternoon, and started to get really excited about it.”. This school year, athletes are at home staring at a screen for more than 6 hours. They aren’t getting the hype they would feel getting leave class early, mess around in the locker room, and have that pregame talk. Different players amongst the state express what they think of the COVID impacts, but all the precautions are here for a reason. Without them, no season would be happening currently.

Patrick DeCamillis is the Athletic Director at Silver Creek High School. His responsibilities have shifted a bit for this year. Opposed to monitoring 11 sports during the fall season, he only had to supervise four sports during this fall season. Although he was given fewer sports to monitor, only more responsibilities arose for these sports during this unprecedented season. The CHSAA modifications make seasons much more difficult for athletes to adapt. When presented with the question if he could change any rules what would he change. DeCamillis stated he wouldn’t change anything because the rules are there for a reason. “I’m not sure that I would change because the guidelines were put in place to protect our community and athletic seasons,” Partick DeCamillis said. The amount of restrictions put in place this year definitely created problems for teams.

Down at the softball field at Silver Creek High School, the Lady Raptors have had both positive and negative reactions to this 2020-2021 fall season. These regulations put in place seemed to crack the road to a successful season this year. For the first couple of weeks, the team was falling into the cracks and were only hurting themselves and their picture. The team eventually found ways around the problems, and now are slowly filling up those gaps with victory after victory. The team finished the season with a 12-6 record. On October 6th, Silver Creek faced off against Pueblo Central for the first round of state. With a final score of 3-0, they advanced to the quarterfinals to play against ranked #3 Holy Family. The team finished out strong and lost to Holy Family 3-1. Considering what they accomplished this season, with everything they had to work around, they pushed through for another successful season. With that in mind, we can’t wait to see what these Raptors will do in the next season of 2021-2022.