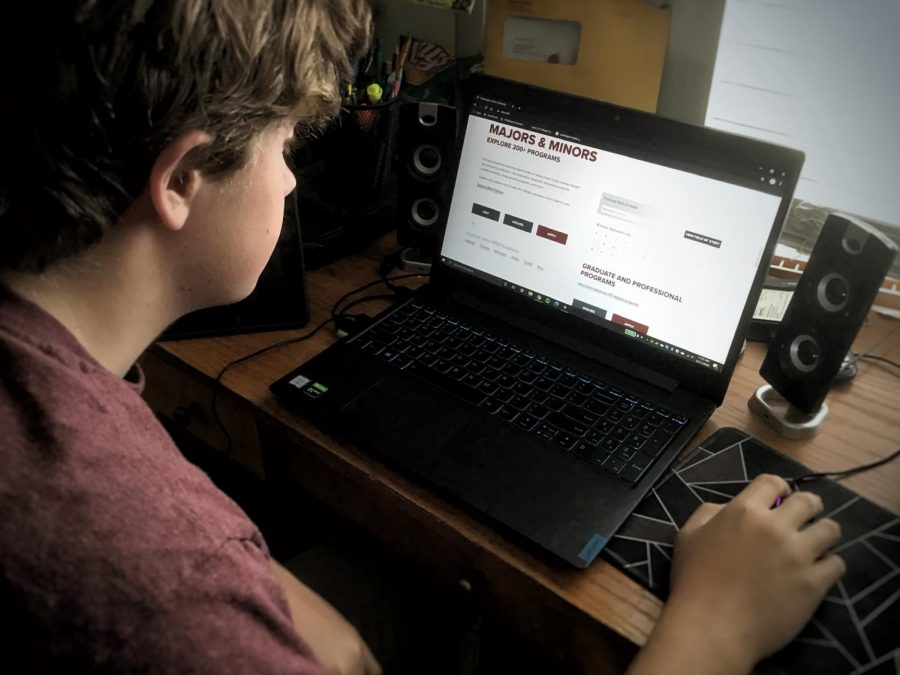 Browsing WSU’s website, Broderick Jellico, a senior at Silver Creek High School, sits at his school workspace looking at what different colleges have to offer students. Despite being in quarantine, Jellico is focused on applying for the most suitable college for his career path. “WSU has a good engineering program, which will be sure to help me with my career,” says Jellico.

Approximately nine months have passed since March of 2020 when schools were shut down because of a virus that has rapidly spread. While many students have been able to cope with the long-lasting struggle of COVID-19, many are still struggling to find where to start their new beginning, while others have already begun. The journey of college lies straight ahead for many high school graduates, and quarantining has created a rocky mountain of problems that students must hike up.

17 year old, Broderick Jellico, who is currently a senior at Silver Creek High School, is one of many who have been preparing for the upcoming future in college. Since October of 2020, Jellico has been scouting the internet, searching for colleges and what they have to offer.

In that time frame, he has applied to four different colleges, such as CU Boulder (University of Colorado Boulder) and CSU (Colorado State University). He has also applied to colleges out of state, such as ASU (Arizona State University), a university in which his application has been accepted. Now, he anxiously waits, and hopes for an acceptance letter from his top choice colleges, CSU and CU Boulder.

“It has been stressful because it is hard to know whether or not you got in,” says Jellico. With the few, limited spots for college applicants, it is only fair that students, such as Jellico, are stressed during this point of the college application process.

Ozzie Klimecki, a freshman at FRCC (Front Range Community College), also a previous graduate from Silver Creek High School, thought of the college application process quite differently from Jellico, despite being in similar circumstances for his application. He says, “[Applying] was pretty easy, but mostly because it was predetermined for a while, and I didn’t know what college I wanted to go to, so I just went to Front Range, for the sake of ease.”

Though Klimecki’s opinions have partially opposed Jellico’s, it did not mean he had no fears for the soon to be future ahead of him. “It’s the transitional period between high school and college, and it’s nerve-racking. A lot of your future is within those steps,” says Klimecki. “That was a big step, and I didn’t want to do it.” Being in the quarantine may have exacerbated his fears of taking that big step, but it also didn’t give him the college experience he hoped for.

After finally enrolling as a student at Front Range, that big step seemed to no longer have an impact on him, as he settled into his first year of college, although his experience thus far into the school year, he explains, is not quite what he had envisioned. Being in quarantine might be to blame. “I only have one class that I have to attend at a certain time,” explains Klimecki. “That same class is the only one where I have to actually talk to a teacher. The rest of it is more self-guided, so I don’t really feel like I am being taught, or getting a college experience.”

For students like Jellico, getting that good college experience is of lesser importance. Jellico states, “[I look forward to] experiences, and getting college out of the way.” He further explains, “I hope that I just survive it.”

Similarly, many college students also hope they can survive their long years of college. Jellico hopes to focus more on what happens after college, rather than the occurrences and events that happen during his college years, which is why simply getting past college is his goal. Despite this, however, he hopes he is able to use the engineering programs that were offered by some of his possible colleges, and he wishes to be able to apply it to his future career.

Unsure of where he is headed, unlike Jellico, Klimecki hopes to use his years in college to understand which career path he wants to take, hoping these years of college in quarantine won’t ruin his opportunities to find that path.

Jellico believes that high school students in quarantine, such as himself, went on the same unfortunate turn as those who are in college. He says, “I feel [just as] unlucky because I’m in a pandemic. We can’t do anything. I’m a senior in high school, and I can’t go to prom or do anything like that. I’m barely holding a job as it is.” After hearing Jellico’s commentary, it is hard not to say that the feelings are mutual with all students, despite age or grade level, being that quarantining has made it difficult for the majority of students to be ordinary students as they once were before March.

Despite this unfortunate turn of events, quarantining has allowed for students to continue learning, which for most, is all students, parents, and families could hope for.