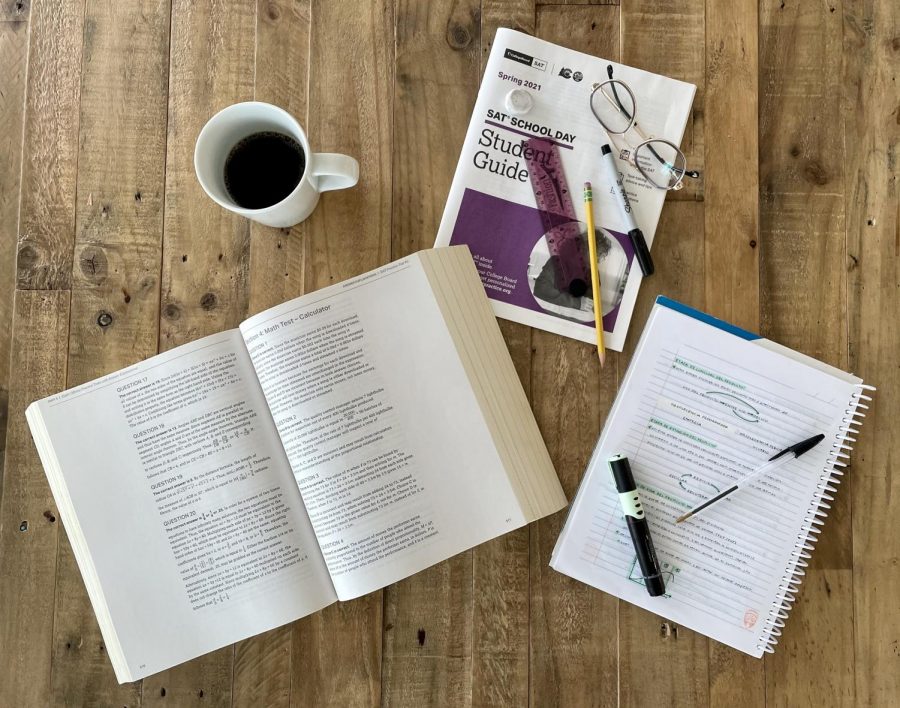 Many Students at Silver Creek High School will use SAT books and study guides provided by schools and libraries to prepare for their tests.

OpEd: The Effects of the SAT and ACT on Student’s Mental Health

In January of 2002, the Executive branch of the United States of America passed an education reform act that would drastically change the landscape of education in our country for decades to come. The No Child Left Behind Act created an emphasis on standardized testing and educational progress that made the SAT and ACT standardized tests what they are today. With the majority of colleges and universities using these tests as a measure of a students academic performance in school and many schools requiring certain scores for admission, students nationwide have had a score of problems forced upon them by the educational system of today.
According to a review conducted by the Princeton Review; “The purpose of the SAT is to measure a high school student’s readiness for college, and provide colleges with one common data point that can be used to compare all applicants.” This means that colleges look at these tests as a measure of a students academic value and performance. What these schools fail to recognize is that while a large number of students do well in these tests and are seen as “good” students, a larger number of students with equal or greater academic performance and community involvement are going by unseen due to their lackluster performance in a test that is not a comprehensive measure of a students character. These tests do not ask about a student’s volunteer hours, leadership roles or extracurricular activity but rather simple grammar and arithmetic questions.
If we ignore the obvious shortcomings of these standardized tests as measures of students’ academic performance, then we can also see that they have negative consequences on their mental health. According to a study by the Dave Nee foundation, who’s mission “is to eliminate the stigma associated with depression and suicide by promoting and encouraging not only the diagnosis and treatment of depression among young adults”, 20 to 30 percent of teens in the United States suffer from depression at some point before adulthood and around 9 percent of high school students have attempted suicide in the last year. That means that over 1 million US high school students have attempted suicide in the last year alone. While many causes can be listed as a source of this data, pressure and expectations from standardized testing can be found as a common source.
Many students from our own Silver Creek High School have said that these tests have been the source of some of their stress. Sophie Swiszcz, a senior at Silver Creek who took the SAT said that; “a lot of students, including myself, feel very unprepared going in,” And “the constant pressure about the test also caused me stress.” Juniors have recently taken most of their standardized tests this spring alongside the AP course tests taking place in the month of May and with both AP and final course tests approaching in the weeks following, students cannot have time to recharge and manage the constant stress.
While these tests have created very obvious problems regarding student mental health and representation, the system created by the No Child Left Behind Act has made this incredibly hard to confront. Under this system school funding and support can be adjusted based on standardized test scores which encourages schools to place even higher emphasis on the “importance” of standardized testing. If a school were to stop preparing for the SAT and ACT their funding would be cut and their students would suffer the consequences of college admission.
Until these tests are removed or have large reform at the federal level, the only solution to help student mental health would be to get schools to educate on the true purpose of these tests but also prepare students and help ease stress levels regarding them. Instead of warning students on the consequences of poor performance of these standardized tests, they could instead show the possibilities opened by getting good scores as well as alternate options that do not need these tests or even advise against them as many colleges like Harvard have been supporting.
According to Aiden Lathrop, a Junior who recently took the SAT at Silver Creek High School, schools could reduce stress and anxiety levels by, “reducing homework so that students’ normal lives aren’t overwhelmed by school work.” This means that schools should use a certain number of school time to help prepare students who plan to take these tests to be ready when the time comes, as well as having extended counselling and private tutoring and less class work to help ease stress and anxiety levels regarding these tests.
According to Kristi Ehle Parker, a student counselor at Silver Creek High School, “If students don’t have good coping skills around stressful events such as taking a big test, I think it can be harmful to their mental health.” Without having these more extensive and available coping mechanisms ready in the school setting even more students will fall victim to the stress and anxiety of these tests.
Standardized testing has become an integral part of the US education system since the early 2000’s and they will likely continue to play a role in this system. However as our own school and community, if we wish to place our friends, children’s, siblings, and peers health and happiness above an outdated and inaccurate measure of a students academic performance throughout their life, we must focus on educating and preparing students for these tests without adding stress and anxiety to their already busy lives.